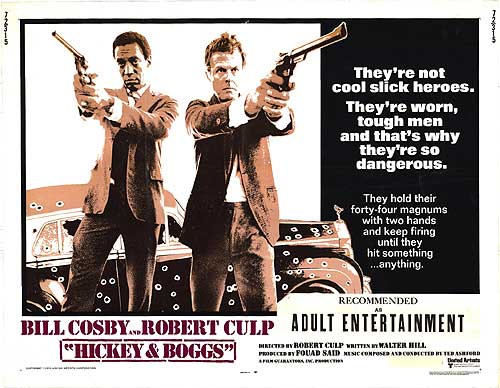 It was 40 years ago this September/October of 1972 that Robert Culp’s only feature length directing effort, Hickey & Boggs was released. The film starred Bill Cosby along with Culp and although it was not a big commercial success at the time of its release, the film has obtained something of a cult status and is now considered a lost gem of early 70’s noir.

I’m biased, of course, but this movie really is a lost gem. As such, and since Hickey & Boggs truly was a significant milestone in Robert Culp’s career, it seemed natural that my next “capapalooza” post would be for the film and I would have it ready by the time of the 40th anniversary. I actually started working on the post way back in January since I knew it would probably run a little long between the number of screens caps I had and doing the overview of the film.

A little long? The whole thing literally got away from me. I have hundreds of screen caps, the overview ran waaay too long plus I had tons of commentary. The whole thing ended up a monster.

So instead of one great big LONG overkill of a post, I decided to break things up into smaller parts. There will still be the usual big capapalooza post (with some restraint on the overview) but I will separate out most of my commentary and other tidbits and gems about the film into other posts. So stay tuned over the next few weeks for more on Hickey & Boggs.