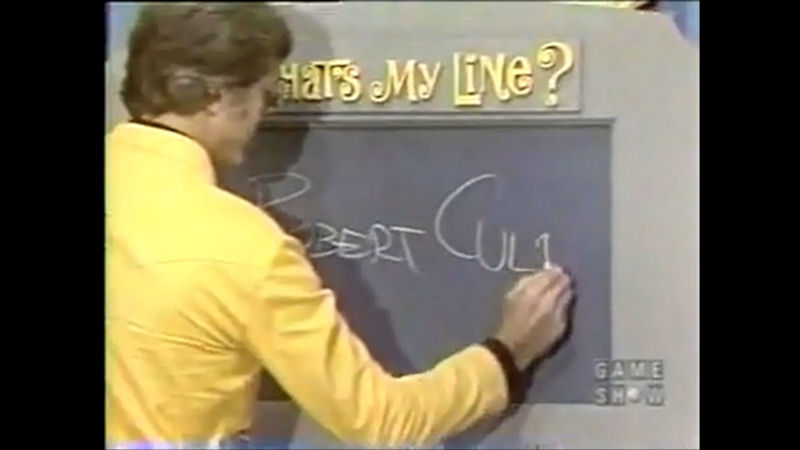 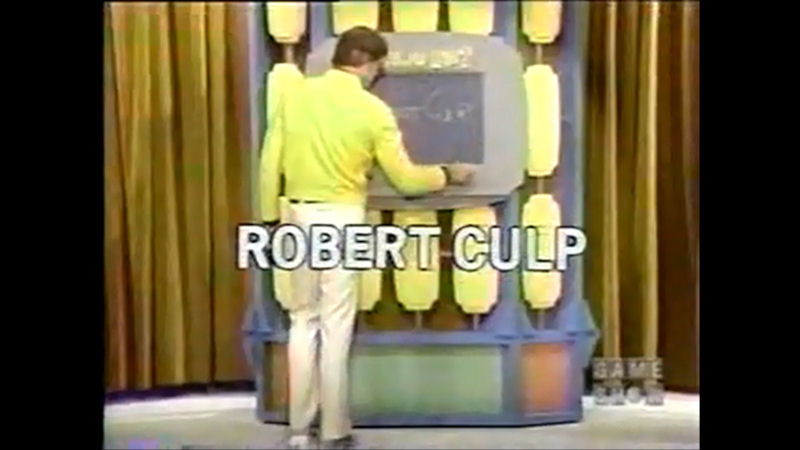 “What’s My Line?” was a long running game show on CBS, airing from 1950 to 1967 before going into syndication in 1968 (lasting until 1975).  Typically, contestants with unusual occupations were put before a celebrity panel of four who had to guess the person’s occupation based on questions where only yes or no answers were allowed.  The contestant won money for every “no” answer they got (at least, in the original version). There was also a “mystery guest,” usually someone famous, that the panel, now blindfolded, had to guess using the same yes or no question format. The mystery guest usually disguised their voice, making it more challenging for the panel to figure out.

Robert Culp was the mystery guest on this September 1972 broadcast of “What’s My Line?” When he emerges from the side of the stage to write his name on the board for the television viewers and studio audience to see, he gets a resounding ovation. The applause prompts one of the panelists, actor Jim Backus, to say, “Judging from that reception you are in the entertainment business.” 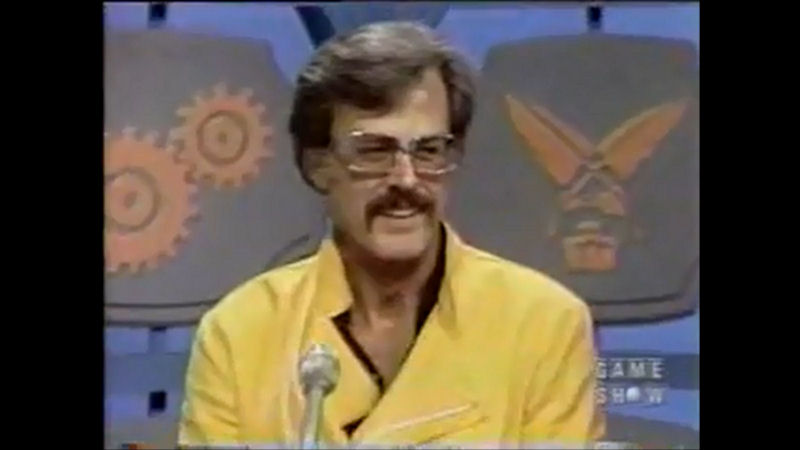 Indeed he is, and in the two minutes the panel has to ask questions to try to guess who he is, they’re effectively stumped. Culp disguises his voice, sounding like an old timer and given his varied career up to that point, (he had been on Broadway, television and motion pictures) he couldn’t always give a really straight yes or no answer. There was no way they could’ve ever pinned down who he was (at least, not in two minutes!)

Shoot, I hardly recognized him with the moustache! This clip was posted to YouTube just shortly after Culp’s passing in 2010 and was the first I had seen him with a moustache ( a real one mind you!).  And regular readers know I was just as surprised to see Culp still sporting the ‘stache in the Columbo episode “The Most Crucial Game” which aired November 5 1972. 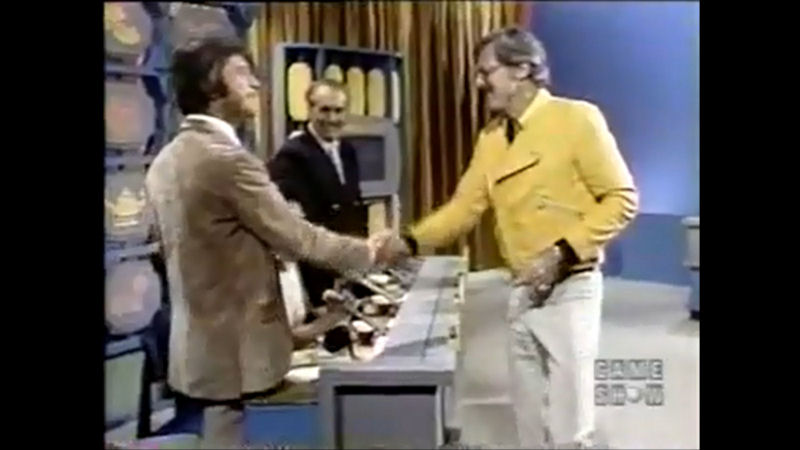 Jim Backus mentions having appeared with Culp on an I Spy episode (“Happy Birthday, Everybody”). He was also in the 1963 Warner Brother’s movie Sunday in New York with Culp, although they had no scenes together. Backus is most recognized as the voice of Mr. Magoo and as Thurston Howell III on Giligan’s Island.

Comedian Soupy Sales compliments Culp on a tv movie that he had seen a rebroadcast of (See the Man Run, first broadcast in December of ’71) and Culp speaks about the upcoming release of Hickey & Boggs. As such, where he talks of it being released within the next month I pegged this game show appearance to have taken place sometime in September of ’72. (Hickey & Boggs was released in October of ’72).

Melba Tolliver is an accomplished journalist who was a reporter and occasional news anchor for WABC-TV in New York City at the time. Culp has an interesting non-verbal reaction after one of Melba’s turns with a question, but I have no idea what prompted it. He answered yes to a question about whether or not he was in a motion picture that was currently playing. Melba followed up asking if it was a drama as opposed to a comedy. Culp answers “neither….or both as the case may be.” I assume he’s referring to Hannie Caulder which was released in July of ’72 and was panned by some critics who couldn’t discern if it was a drama or a comedy.

Arlene Francis was a panelist on the original “What’s My Line?” from 1950-1967 and returned for the syndicated version in 1968. Her comment of “poor fellow” after they determine that Culp was not currently in a Broadway production and was not rehearsing for one is a hoot. 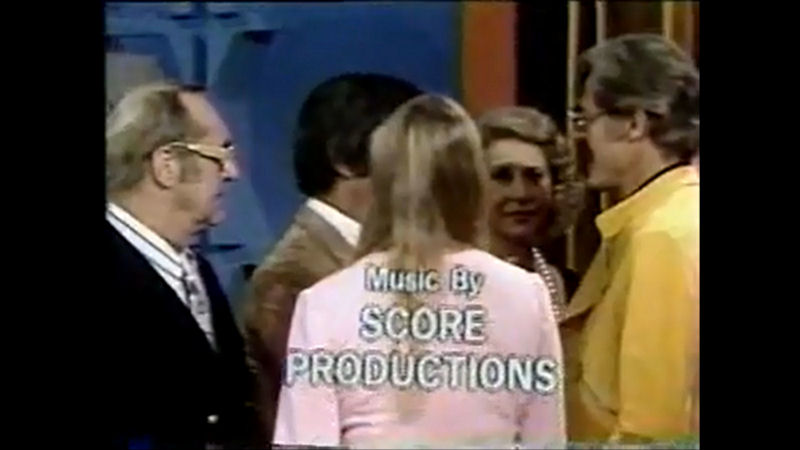 My caps come from the YouTube video, which isn’t always easy to cap (thus, there are so few here). However, you can still watch the video and see Culp stump the panel.

The Match Game (as it was called during the sixties) was resurrected in 1973 as “Match Game ’73” with subsequent seasons being denoted by year (Match Game ’74, Match Game ’75, ect…). Near as I can tell this was Robert Culp’s only appearance on Match Game in the ’70s,  He would have appeared in the entire week’s run of episodes, however, I’ve only ever seen this first day.

Since Culp is in the first chair at the top row, he’s the first introduced. Um, pay attention, Bob…

Although this episode is early in the Match Game run, the familiar feel of the show is well established already. What would become the familiar cast of misfits are here, with Brett Sommers and Richard Dawson. Charles Nelson Riley was not yet a regular, but in what would be his chair is Mr. Brett Sommers, Jack Klugman. Frequent visitor Jo Ann Pflug is here and the “new blood” are Robert and actress Pat Carroll. Gene Rayburn promises the newbies they’re gonna have fun. Culp asks when. Heh. Carroll complains something about missing a PTA meeting for this.  Honestly though, I’m not sure Culp really wanted to be there at first, it’s hard to tell.

The two contestants are Allen and Diane. Allan picks the first question, which is…

Gene: “Molly fed Jake nothing at all but chicken soup until he finally BLANKED.”

The usual shot of the stars writing their answers down. Nice close up of Culp. May I add that he looks very sharp in that blue suit? 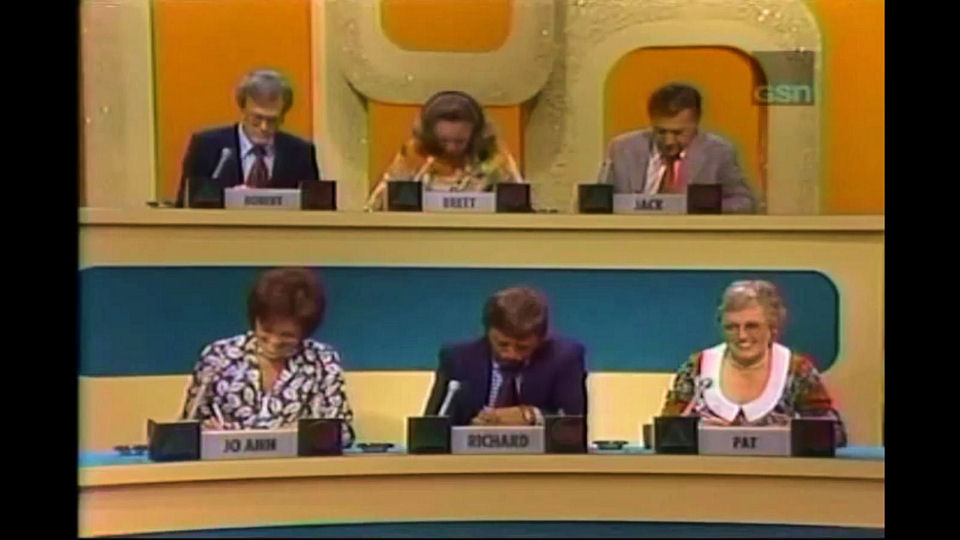 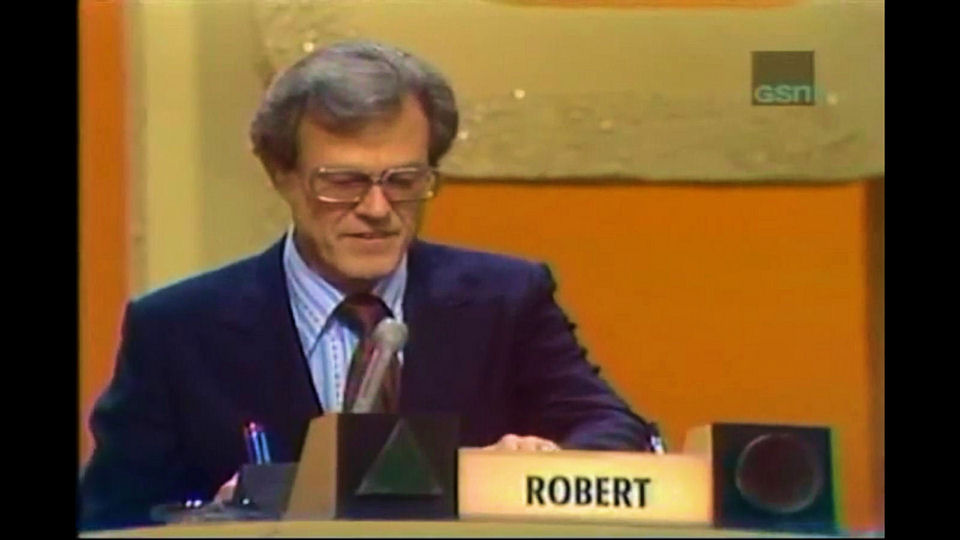 Allan answers that Jake “cackled.” The audience likes this one.

Robert: “Well, it was close…he croaked.” 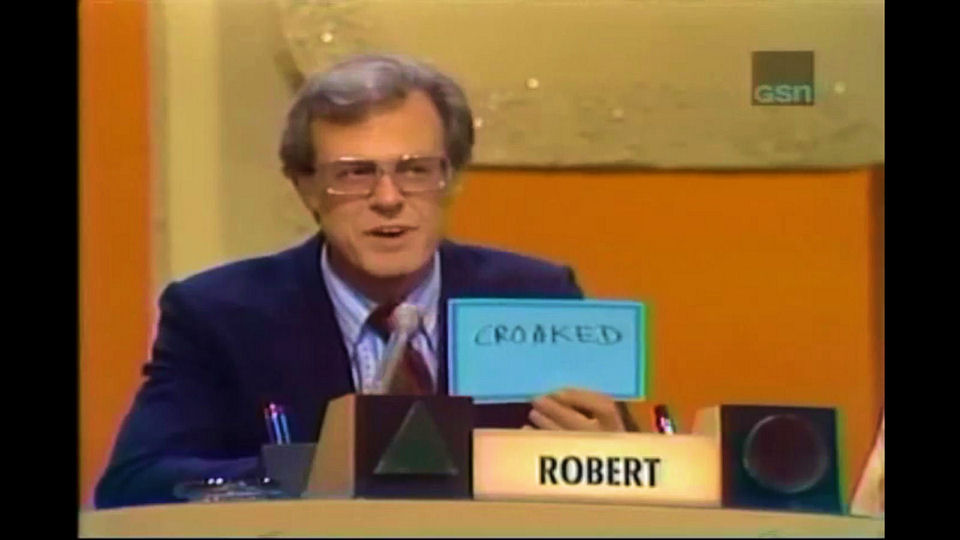 Most of the rest of the answers are similar, that Jake died. Klugman figures the soup might be like Brett makes it…thus, Jake vomitted. Anyway, Allan gets no matches from any of the stars. Culp says something about “no chicken soup jokes here…”

Next question for Diane… “When little Maybel dances with Big Wilt, her nose touches his BLANK.” 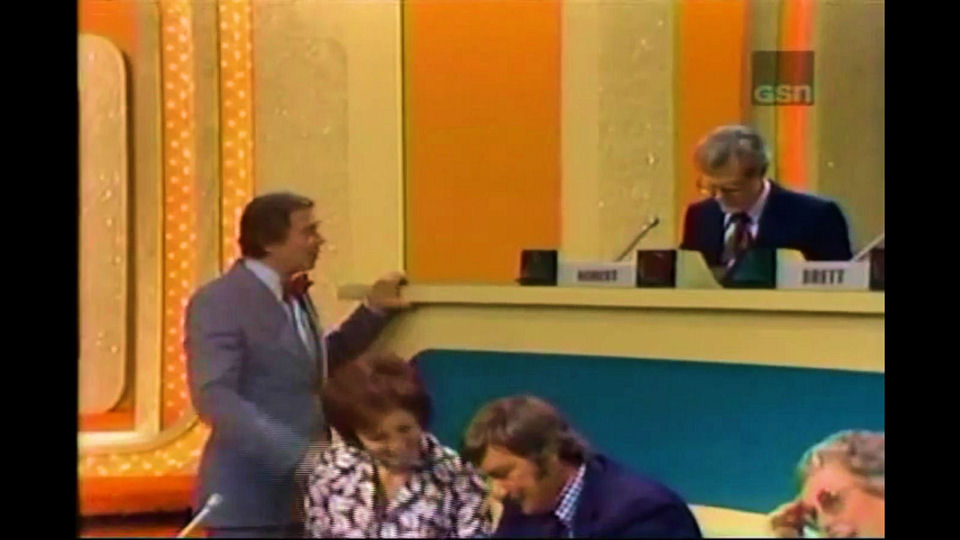 Now, by this point if you’re not familiar with Match Game you may have noticed the questions could sometimes be suggestive in some way. The answers, however, could not violate FCC rules. But you know everybody, including the audience, are thinking the same damn FCC violating answer. They just can’t say it. Gene tells everyone not to be influenced by this “evil audience” who are hooting and snickering. Since they’re all thinking the same answer, Culp is heard saying something like “nobody is that short.”

Robert: “Well the only Wilt I know is a lot taller than that. Belt buckle.” 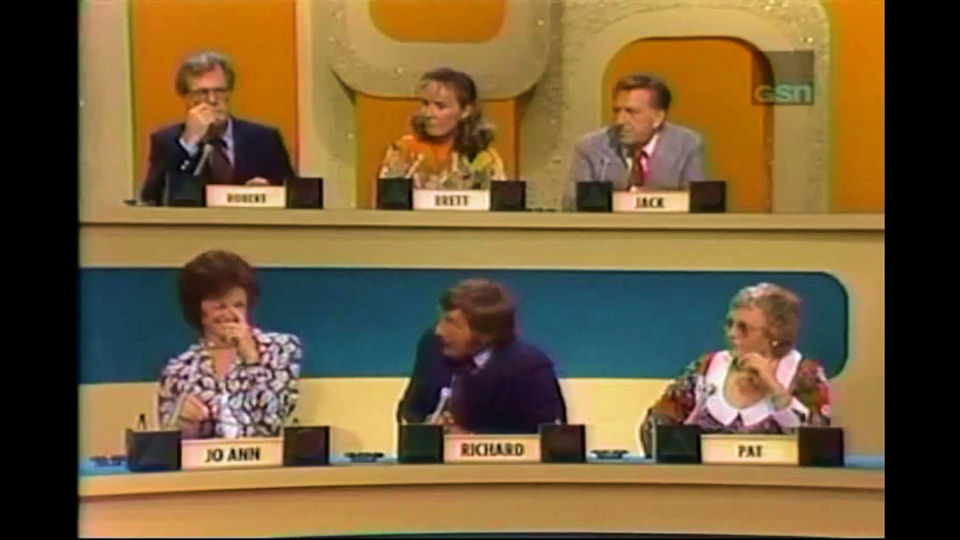 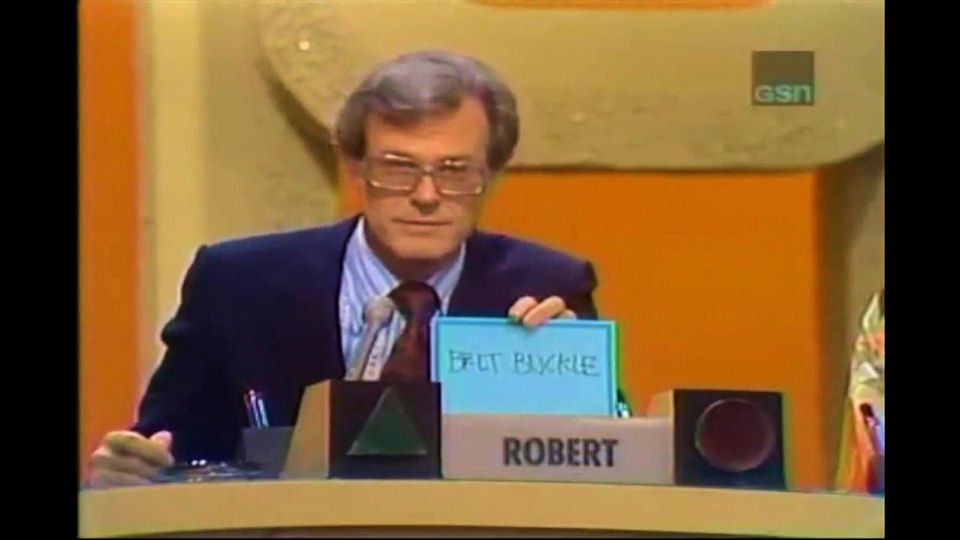 Although Culp doesn’t match with Diane, he and Jack Klugman are on the same wavelength. Klugman’s answer was also belt buckle. “I think Robert and I dance with the same Wilt, I said belt buckle… ” 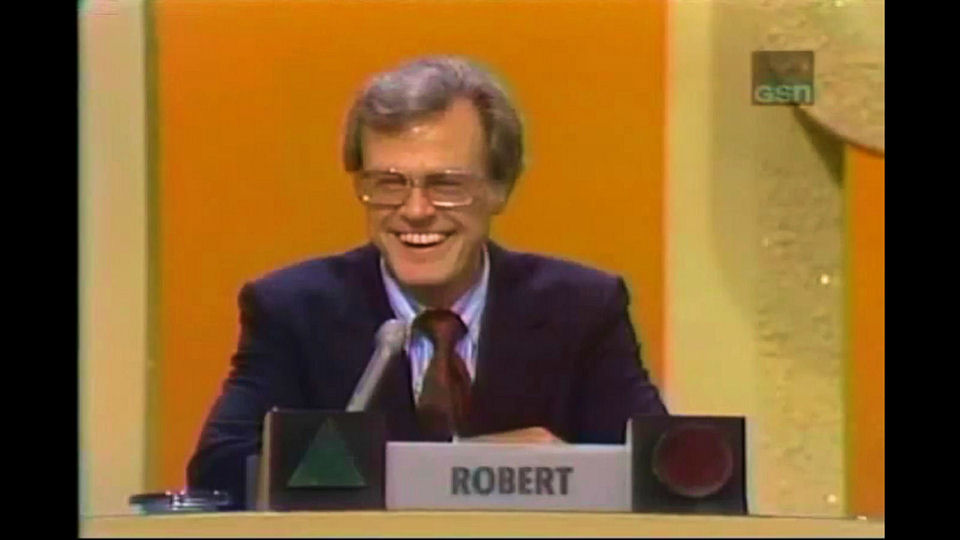 Jo Ann and Pat also say belt buckle. Brett and Richard say navel. Diane does not get a match but by this point Culp seems to be loosening up. On to the next question.

Gene: “Robinson Crusoe said to Friday, ‘We’ve been on this island together for 20 years. Let’s BLANK.’” 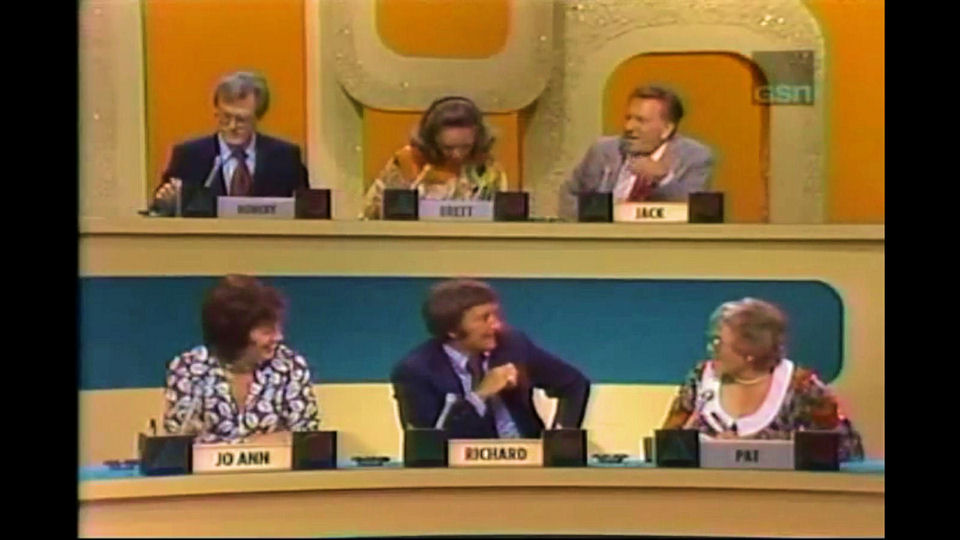 Yeah. You’re thinking all kindsa naughty answers aren’t you? So’s everybody else. Allan, who just can’t help himself, answers: “Get married.”

Robert: “I told you he was a vision in blue!” (Allan is wearing a bright powder blue sport coat.)

“I really wanted to play it very straight, because they’re cold up there and they wanted to build a fire.” 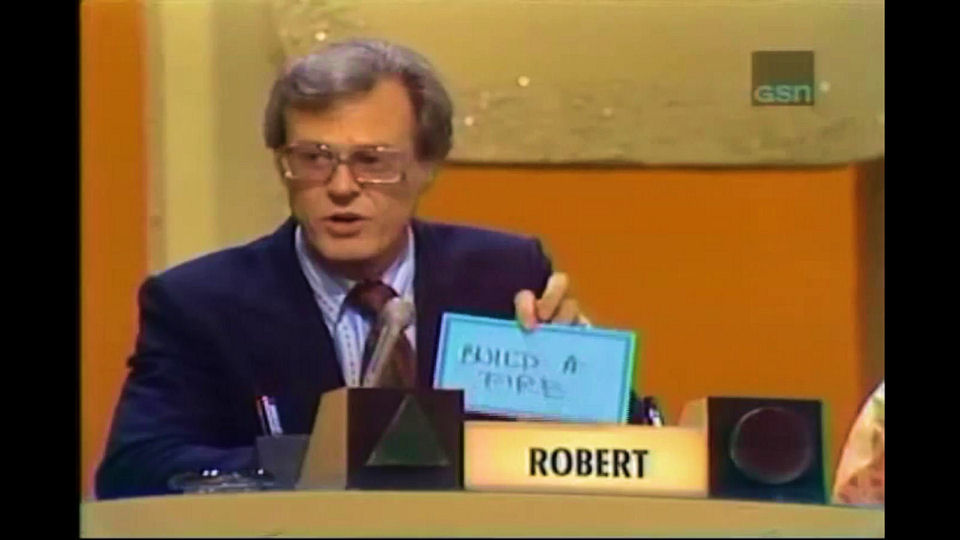 Build a fire? No, I’m sure that’s not what he first thought. (And if I was stuck on an island with Robert Culp for 20 years, I would hope we built a fire long before then!) Brett says “dance.” Klugman’s answer he figures will get him thrown out of the business…he matches Allen with “get married.” Jo Ann’s answer was that they should leave. Richard also matches with Allen for “get married.” And Pat figured as Jo Ann did, that they should just get out.

After a commerical break we return with the next question, which is, “Herman flew all the way to Brooklyn to look up Janet’s BLANK.”

The audience gets a good snicker along with some of the celebs on the panel. Culp asks Gene to repeat the question, saying, “I dare you to say it again.” Gene repeats it, unruffled, everybody chuckles and the close up of Culp shows… 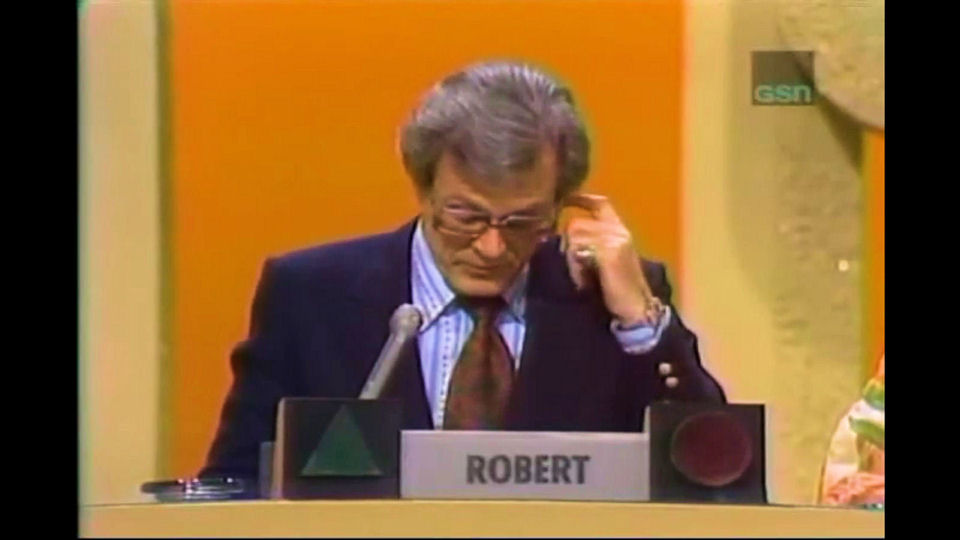 Yeah. He’s thinking, “Geeze…” I’m also willing to bet Culp is thinking a particular answer but he plays it straight.

Brett is giggling like a mad woman as she writes her answer down. Everybody puts their cards in, Culp being the last one.

Robert: “You guys are too tough for me, I had to start out easy with this. I said ‘address.’” 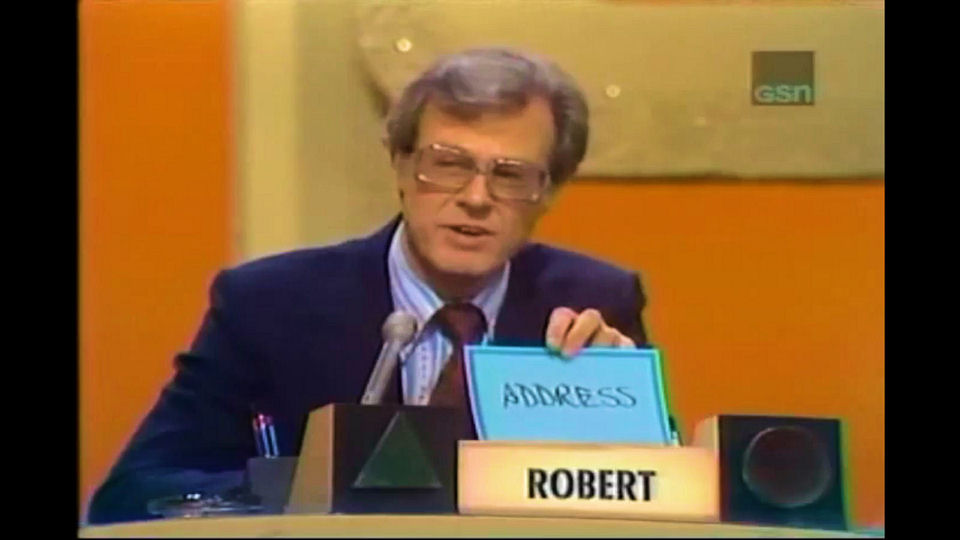 No match. On to Brett who just stares at Gene for a long moment, looking innocent. Finally she snaps out of it and pulls her card out. The viewer and the audience can’t see it, but Culp does and you hear him burst out laughing.

That answer Culp might’ve been thinking of? Brett had no shame and proudly displays her card. “HER SKIRT!” After a good laugh, Brett then apologizes for her complete lack of taste. Culp can be heard saying “it’s allright…” Heh!

Once again Jack Klugman matches Culp with “address.” None of the other celebrities match with Diane so Allan wins the round. He goes on to win $500 in the super match with Richard but doesn’t win the $5000.

Round two with a new player, Barbara. Barbara picks question B, which is, “The morning after the party, Harry said, ‘Boy my mouth tastes like somebody left their BLANK in it.’” 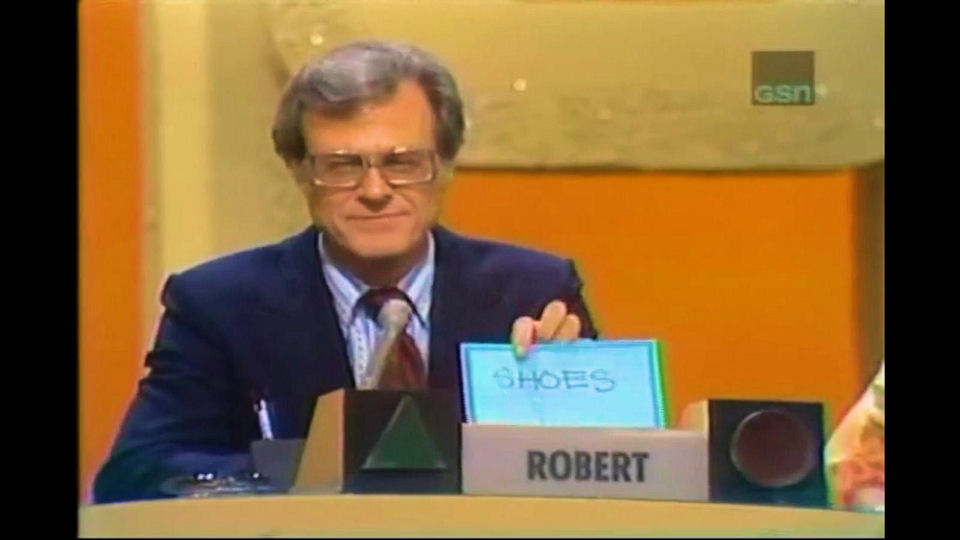 Barbara would match with Brett and Richard to get two points. Unfortunately, that would be all the time they would have for this day’s game.

Now I dunno about you, but I would have loved to have been a contestant on Match Game just for the heck of it, but particularly if Culp was on the panel. If I had won a round and made it to the supermatch I would’ve picked him. I wouldn’t have cared if I won or lost at that point, I would’ve been happy just to have stood on that stage, with Culp not 15 feet away and try to see if I could match him.

And see about building that fire. 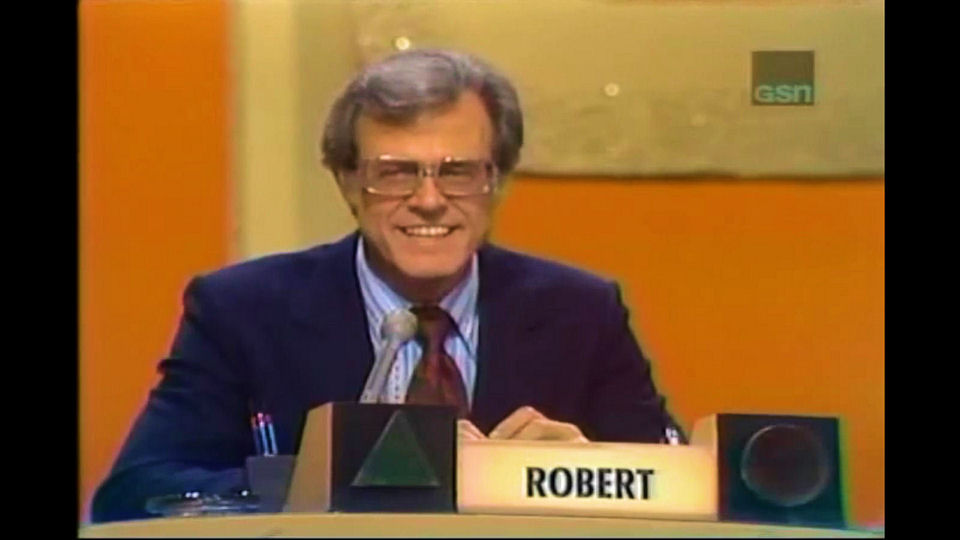 You can watch the Match Game ’73 episode on YouTube in five parts (Part One, Part Two, Part Three, Part Four, Part Five) which is where I grabbed my screen caps from. As always, with the fickle existence that is YouTube, check it out sooner rather than later as there’s no guarantee on how long the video will remain posted.

Now if I can just find the rest of his appearances from that week. I believe this screen cap I found on the internet is from the same week. 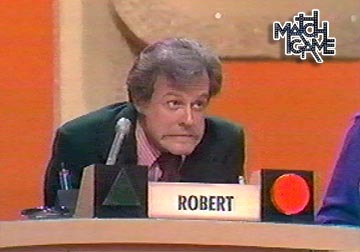