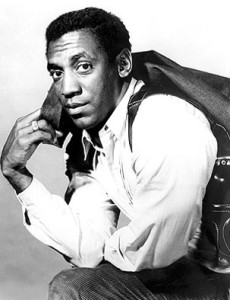 World renowned linguist Alexander “Scotty” Scott was born on in Philadelphia, Pennsylvania on July 12, 1939.  Though most of his life revolved around Education, (first as a student then as distinguished professor), there was a brief period of time in the mid to late 1960’s where Dr. Scott worked as a trainer for tennis ace and international playboy Kelly Robinson.  For many years the reasons for Scott’s association for Robinson seemed inexplicable, given the advanced degrees attained by Scott, but as details about the former’s covert activities for the US Government came to light, it has been quietly taken as fact that Alexander Scott also worked for a clandestine branch of the Pentagon.

In any case, it cannot be said that Scott’s early life boded well for his later success.  His mother was a domestic who was a de facto single mother to her sons Alexander and Russell and daughter Josephine (Jo), while her husband served abroad in the Navy.  This fostered closeness between the mother and her eldest child distance nor time could sever.  Until her passing sometime in the early oughts, mother and son spoke frequently by letter, phone, and finally email.  Mrs. Scott was supported in her efforts by a large extended family.  As an adult Scott would speak with some fondness of his uncles, aunts and cousins.  Her faith community was also his, and the experience of being “raised in church” formed the basis of his ethical code that remains intact to this day.  To that end, it can be said Alexander Scott will always do the right thing, even if it is not the right or easy thing for him.

Though his family is central to his life, he was also known later in life to say “I come from a family of losers.”  Though Scott never confirmed which of his family members were so afflicted, in his adult life he never smoked or drank, strongly implying that addiction was a multi-generational problem in his immediate circle.   What he has confirmed is that he had an uncle in “the spy business” and that may have been Scott’s first introduction to the secret life of spies.

By the time he was old enough to go to college, Scott’s father was no longer in the picture and struck out on his own by joining the Navy.  Missing the Korean War by three years, Alexander was never the less on active duty as the Cold War heated up.  Aboard vessels that were frequently the American government’s first line of defense, it is just possible that Scott began to wonder what more he could do to keep his mother, and other mothers like her, safe.

The late 1950’s found him back in his hometown attending Temple University where his scholastic existence was peripatetic.  He was All-Eastern in football and majored in Physical Education.  Unusually he carried a second major in Languages, studying traditional favorites such as Spanish and Italian, but also Sanskrit and Arabic.   His professor for Sanskrit was an officer for several American intelligence agencies who formally invited Scott to pursue a life in the clandestine services.

Before committing to that life, he chose to continue his studies in languages at Oxford on a Rhodes scholarship.   While in Britain, he studied Chinese and possibly Japanese, as well as perfecting his skills in the Romance languages, Ancient and Modern Greek, and Latin.  It is possible that during his time abroad, Scott obtained enough credits for a doctorate, but if he had it, he did not start using his title for several more years. 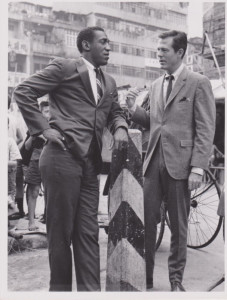 Returning stateside by January of 1964, Scott found himself in San Francisco for several months.  The Pentagon was known to have a training facility for its secret officers and operations, and this may explain his presence there, especially since Kelly Robinson was in San Francisco at the same time, allegedly recovering from an injury that prevented him from keeping an active tennis schedule. In May of that year, he began to travel abroad as a trainer for hire, interestingly adding Judo to his skill set while in Japan, and by the end of the year he was in employ of Robinson.  The two would be photographed together, referred to as tennis pro and trainer for the next several years.

To outsiders, the pair seemed to have an unlikely friendship.  Robinson came from an upper middle class background and had the means to support himself as an athlete.   Where Scott abstained from tobacco and alcohol, Robinson indulged in both heavily.   As a trainer, Scotty brought a gravitas to the game that Kelly sorely needed.  But as one looked at the men more closely, those differences seem minor compared to what they had in common.  Both were highly educated (Robinson did attend Princeton University as a Pre-Law major), deeply influenced by their parents’ morals, devoted to their country and the principles it stands for, and as evident from the photos of the men, incredibly loyal to each other.

Through the mid to late sixties the two men were on every continent but Antarctica and “coincidentally” found themselves in countries just as international crises were being solved.  For instance, they were in Japan just as a South African based industrial diamond smuggling ring was broken up; the two were guests of General Vera in Spain just before his successful coup restoring him to power in South America; both men found themselves in the American Southwest during a brief but notorious power outage that was meant to be the start of a domestic terrorism campaign.   Whatever the case, the men were successful both on and off the court.

For reasons that remain potentially classified and most definitely unknown, that success ended in the seventies when the two men stopped being partners and corresponded only periodically by letter until 1994.  Kelly Robinson appeared at a few sporting events in the very early seventies without his trainer, and by the mid-seventies had retired from the sport.  It was quietly understood within the international tennis community that the once close friends were no longer speaking as often, but no one knew why. 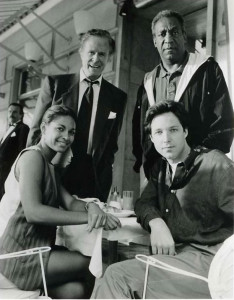 By the early 1970’s, now referring to himself as Dr. Alexander Scott, he began teaching romance languages at California Polytechnic State University in San Luis Obispo.  He also married his wife Lily and they had a daughter, Nicole.  By the mid-nineties he was a full tenured professor while his daughter worked for the Department of Agriculture as an analyst.  Her branch of the Department was directed by her father’s former partner Kelly Robinson, and she found herself paired with Robinson’s son Bennett, this according to several reports written by the younger Robinson and Scott on US farming interests overseas.  On one such fact finding mission Nicole Scott and Bennett Robinson were joined by their fathers and it is assumed that it was at this point the two men patched up their differences.  Though Dr. Scott was known to have written a few manuals for the Pentagon, it is clear that he did not resume his clandestine activities and he was not seen in public with Kelly Robinson again.

As of the fall 2013, he continues to work for the Cal State system, and in an interview with a student publication reports no plans to retire.