Mining the Google news archive for Hannie Caulder resulted in tidbits that were more of the one line Hollywood trashy gossip vague variety rather than anything of any substance. Some of it left me scratching my head, such as this titillating tidbit from entertainment writer/television critic Jack O’Brian in April of 1971: “The big explosion in Spain was Raquel Welch and Bob Culp battling for real on the set of “Hannie Caulder.”

And that’s all he wrote. What?! Are we implying here that Culp and Welch went toe to toe about something? Or did somebody confuse Culp with Patrick Curtis, Welch’s husband at the time? (The two were on the outs during the filming of this movie.) Of course, do you think I could find anything more about this supposed battle royal? Of course not.

A year later, in May of ‘72, Mr. O’Brian wrote: “Raquel Welch wears just a poncho and a gun in her “Hannie Caulder” Western. Her contract lets her okay every still used.” I then found a few mentions by the blunt and often catty Hollywood columnist Joyce Haber, who wrote in May of 1971, “There’s a scandal brewing over ‘Hannie Caulder,’ the Raquel Welch starrer recently finished in Spain. Few, if any, collected their salaries beyond the first two weeks after shooting started. Certainly not Burt Kennedy, the director, or the cast which co-starred Ernest Borgnine and Robert Culp. ‘Hannie’ is a co-production of David Haft’s Tigon and Raquel “Pat Curtis” Curtwell. But Kennedy has spoken to his lawyer.”

She then followed up on June 2, 1971 with a correction: “David Haft cables from Twickenham Studios, London, that he had nothing to do with Raquel Welch’s latest film “Hannie Caulder.” That’s the one Burt Kennedy has consulted his lawyer about for default of salary. ‘The company is not David Haft’s Tigon nor am I in any way, shape or form responsible for its activities of financial obligations. Any difficulties between that company, Patrick Curtis (Miss Welch’s estranged mate), Burt Kennedy et al, are neither related to nor concern me. I would be most appreciative if you would make this a matter of record.’ Matter recorded, Mr. Haft.” 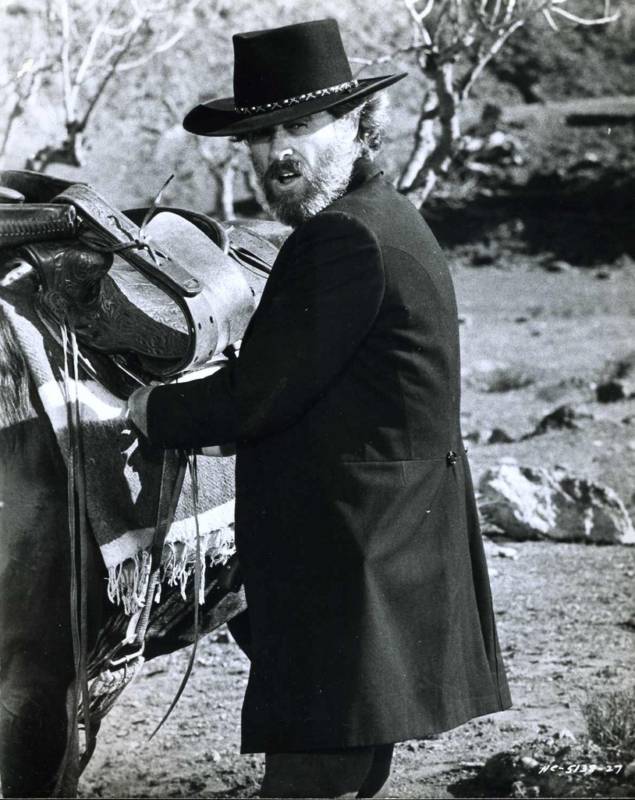 Incidentally, I found nothing more about the salary dispute and can only assume it was resolved and everyone was paid.

Earl Wilson chimed in as well, commenting on the situation between Raquel Welch and husband Patrick Curtis. Things were not well but on April 8, 1971, Wilson reported that things had been “resolved.” I’m guessing that resolved meant they split up, which was what was reported four days later by Norma Lee Browning of the Chicago Tribune. (Welch and Curtis were divorced by January of ’72).

If the trite breathless Hollywood “news” items weren’t bad enough, reviews for ‘Hannie Caulder’ were not particularly kind or enthusiastic. “A travesty of the western genre.” “Bland Mediocrity.” One reviewer points out that the film can’t seem to make up its mind if it’s a tragedy or a comedy (which I’ll concede is a legitimate point).

Culp, however, apparently took most critics by surprise. In fact, one review put it that “Culp is a surprise also, the pleasantest one.” Another review calls Culp “personable” and says he “plays it like he did in ‘I Spy’ on TV and charms Miss Welch and the audience. “ 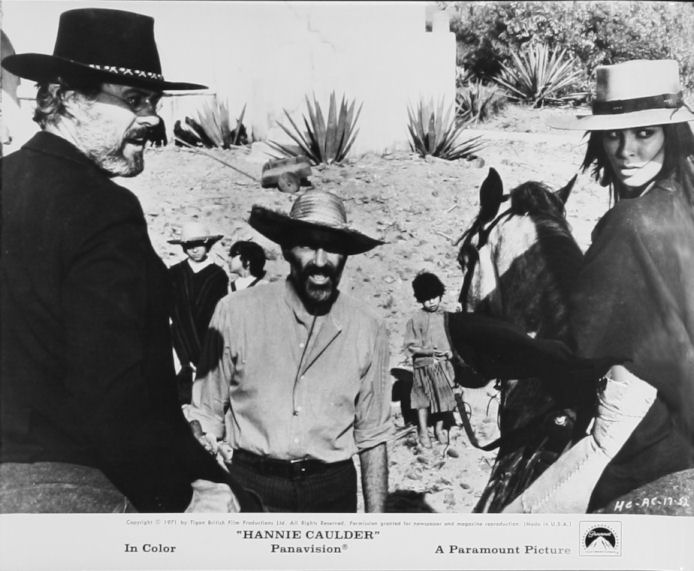 On the other end of the spectrum, Jamie Portman of the Calgary Herald wrote on August 9, 1972, “With his greying beard, dark jacket and granny glasses, Thomas Luther looks more circuit preacher than lethal gunslinger. Look closer and you make the improbable discovery that it’s really Robert Culp hiding behind all that foliage.

“Mr. Culp appears more embarrassed than smitten by Miss Welch’s charms. Objecting to their ample display, he loans her a pair of his trousers. The trousers, unhappily, are baggy, but Miss Welch solves that problem by visiting the territory’s haberdasher and decking herself out in a pair of suede pants which, after repeated immersion in a bath-barrel, give the impression that she’s been poured into them.”

Mr. Portman later added that “Mr. Culp is stalwart in a bizarre sort of way.” Not sure exactly what he means by that… 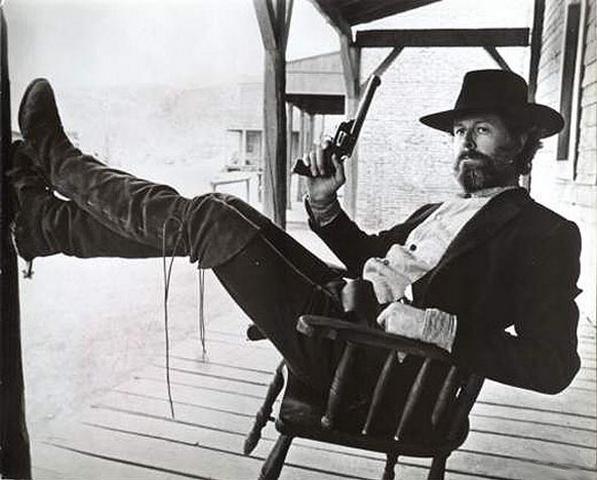 Norman Dresser of the Toledo Blade wasn’t thrilled much with the movie at all, commenting that “Miss Welch wears a sack-like poncho throughout the movie, which hides 90 percent of her screen personality.”

And of Culp? Mr. Dresser wrote, “Also on hand, in another off-beat bit of casting, is Robert Culp as a bounty hunter who teaches Miss Welch how to shoot so she can carry out her mission. He teaches her very well, indeed.” 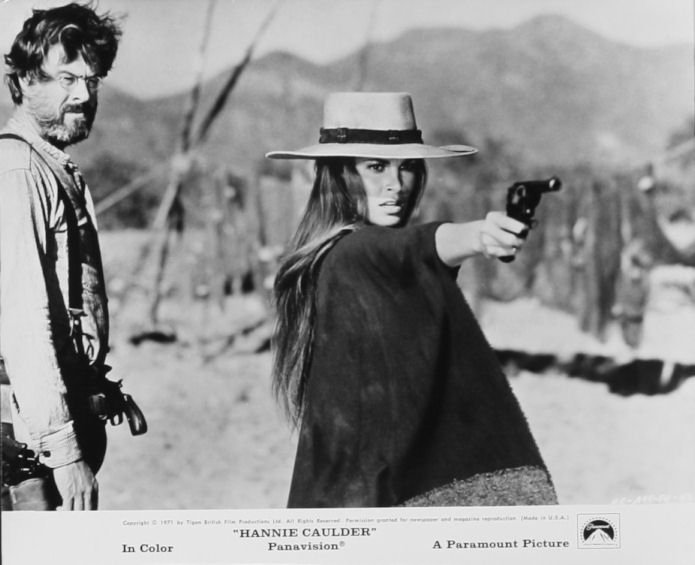 Stefanie Pettit of the Spokesman Review (Spokane, WA) was blunt. “Bland at best, this film has simply nothing at all to recommend it” and “if by some chance, (Welch) should become flat-chested later in life, all her talent will be gone.”

Man. As I read these reviews all I could think of was how hard these critics had to work to try an outdo each other in the snark and smarm department back then. Then I realized that nothing’s changed since.

Despite all that, I did find one redeeming piece of Hollywood gossip. This, from an uncredited column from March 12, 1971: “Bob Culp – in Spain doing it with Raquel Welch in ‘Hannie Caulder’ flying on still another trip. Got his shirts back from a local cleaning chick with something new in laundry marks – the home phone number of the senorita who did the ironing.”

My non-snark, non-smarm overview and screen caps of “Hannie Caulder” can be found here.