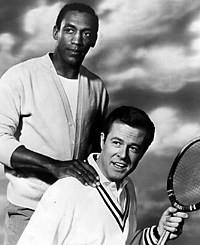 Using information mentioned or otherwise inferred in the episodes and from the 1994 I Spy Returns TV movie, Barbara K. Emanuele has compiled comprehensive character bios for Kelly Robinson and Alexander Scott. Given the fact that the show ran for three seasons and accounting for continuity issues and conflicting tidbits, Barbara has managed to pull together information that brings further depth to these characters.  TheConsummateCulp.com is pleased to showcase these character bios!

“They were partners in the truest sense of the word.  Ideally matched in wit, charm, looks, and strength, at no point was one far superior to the other.  Mission after mission, locked room after opened room, they were equals who never let the obvious difference in race be anything more than a physical difference.  Their work and their cover allowed them to function above the racial turmoil of the late sixties.”